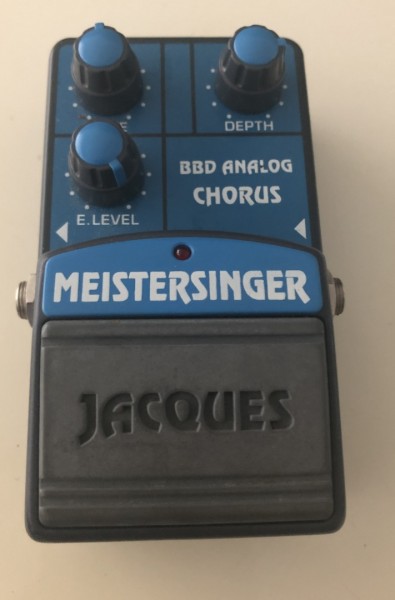 Descrizione
The Meistersinger pays homage to the best analog chorus pedals made in the past. But the Meistersinger is not a digital model; it is a true analog delay chip chorus, like the originals. It is not an imitation; it's the real thing.

The reasons why analog chorus -- or any analog time based effect -- sounds better than digital are numerous. But the main reason is that analog produces a slightly detuned tone. It's therefore more like having another guitarist playing along with you, rather than the perfect replica of a digital effect.

Chorus was invented to make believe you are not alone. It mimes two musicians playing the same thing at the same time, thus enriching the tone, as in a choir. Most digital chorus tends to kill the punch and dynamics, an even more obvious defect when used with electric guitar. The model processors are plagued with this same problem, because of the difficulty of digitally encoding the dynamics of your playing in real time.

It is quite strange nobody ever evokes this simple strategy. When you manipulate hand-tweakable chorus effects ( like the old MXR rack or ADA Pitchtraq) you notice that the chorus effect sounds twice as good with a negative detune than a positive one. The reason could be a deeper body of the resulting mix or a more complicated comb harmonics effect. This feature was incorporated in the Meistersinger to give it the best chorus sound possible.